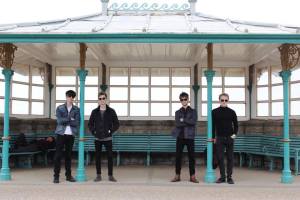 We like to point your attention to this new up and coming psychedelic rock band, one listen to their thick basslines, swirling psych noise and power driven riffs and you’ll be hooked!

Confectionery (Syd Bull, Stan Bull, Matt Teal, Connor Godfrey, Charlie Hawkins) have been making their presence known in the South West scene of the the last few months – through recording sessions, local shows and building their loyal fan base. With 2015 on the horizon the psych rock five piece have released a glimpse into what could be a very promising year for them.

Forrest Green is the second single, following up from their debut Flume. Forrest Green truly blossoms through its shimmering electric guitar strings and Syd’s melodic vocal tones, amplified soon after by rumbling riffs, screeching soundscapes, thumping drums and nail-biting solos – bringing an 80s induced rock flare to your ears. Influences of The Stones Roses and Nirvana are evident but with an edgier sound that’ll capture many attention. Bristol noise rock fans we urge you to take a listen, you won’t be disappointed!

You can stream Forrest Green below and keep on track with the band’s ongoings over on Facebook.