Kicking off her UK/European tour with 36 dates across England, Germany and Brussels, first stop Bristol! The Louisiana the perfect choice of venue for top music nights and another spectacular in the My Big Sister Presents Series, it’s Laura Kidd’s 13th in her series of empowering non stop work ethic showcases in introducing new music to the audiences – from dazzling electro pop to full blown post punk goodness, there’s always something for everyone. Tonight was no exception, an eclectic line up range with the She Makes War leading the front line with an exclusive appearance of her band, joining Laura were Bristol trio rocker Forgery Lit and London singer/songwriter James Brute, marking his return to Bristol with new material and a new band.

Taking the stage first was James Brute, charismatic acoustic instrumentals alongside his fellow guitarist Mat Martin and drummer Fin Brown. Blue toned and shaded stage lights befitting to the rhythmic sounds of folk Americana – dynamic positions, twist and turns through gritty guitar strings, intertwining of electric and bass strings, scratching and raffling amongst James husky vocals. Fin’s toned drumming providing the backbone, slick guitar work and haunting harmonic melodies as James shares his folky tales. The most noteworthy however was the performance of his new single Bury Yourself, the acapella piece that has captivated previous shows and it was the case here, a backdrop of harmonic thrumming and rhythmic hand claps which brought the audience to a stand still – a cracking start the show.

Forgery Lit‘s reputation is well known in the Bristol scene so an exciting set was anticipated. Adrenaline fuelled rock ‘n’ roll lead by drummer Ami Amp’s empowering vocals, slick basslines from Gareth Jones and artistic rhythmic work from Nico Mar. Their set was indeed explosive, Ami’s drumming and melodic vocals bringing the firepower, stylishly layered by Gareth tremendous work on the bass and Nico’s dynamic rhythms and rapid solos; a set that could not be faulted, one that was oozing with rock ‘n’ roll confidence.

The stage was set for She Make War, Bristol’s ‘Gloom Pop’ artist but this time we were treated with an exclusive appearance of her full band (Chris Nicholls, Ami Amp and Joan Patrick), making this a one of a kind live performance. There was the usual instrumental range of electric guitar, vocal loops, ukelele, marching drum and signature megaphone but with Laura’s live band all this truly evolved into something more broader, unique and dynamic. This was Laura’s punk rock spirit and DIY work ethic at full force, amplified by ten fold with Amp’s solid drum presence, Joan’s exquisite violin and Chris’s tight guitar work. Kidd’s rumbling basslines then switching to ukelele, foot percussion, bells and sonic loops; keeping the audience on their toes throughout. From old tracks such as Olympian and NIMN to new ones like Stargazing and The Best, offering us an enticing glimpse into her forthcoming album Direction Of Travel. Delete is always a stand out at Laura’s shows, sonic loops and sirens effects captivating the crowd with Kidd marching onwards with the megaphone but the band’s performance of Drown Me Out completely stole the show – utterly brilliant and explosive! 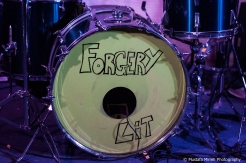 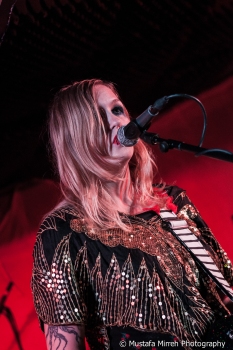 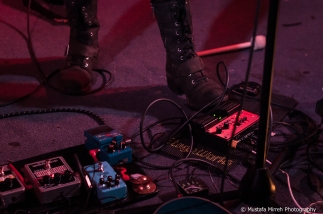 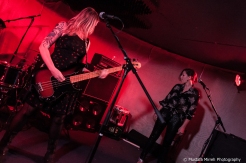 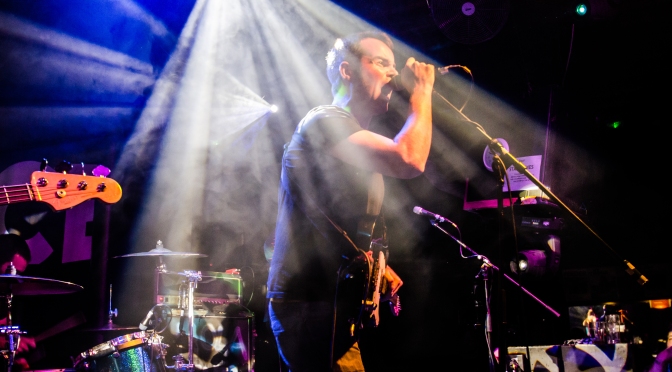 A side stepping stamp, lyrics surreal and demented as “kept by bees” sparks a unison chant. Chris Morris, Bill Hicks truth or a compilation of stories from a senile aunt, shattered distortion, lacerates the air, kung fu guitar stabs rattle the roof.

Pencil thin grunge sound, fine Frank Black line is decidedly playful, as inebriated fingers scuttle up a fret board. But this evening has a footnote, an over-arching roar, tongue in cheek takes a back seat as Andy’s necks displays rage engorged veins with darkly sardonic intervals tumbling bass. A ball of “Wire“ fur pouring angst diagonal world view, hapless and cynical as Fugazi ingredients concoct a punk scent, injecting energy and throw away indignation with which we all concur.

Closing proceedings with a quick fire medley, sparked off with a ballad, quite uncharacteristic with mounting momentum, a culmination of which the dissection of drum kit amps scream in dispute as the order dissolves.

To say I was excited was an understatement, when I heard that San Francisco producer Scott Hansen aka Tycho was coming to Bristol, all my other thoughts and plans simple faded because I knew right away this was my only chance to see him live. I missed out on seeing Hansen whilst I was in Toronto earlier in the year, a sold out show on his US tour and to no surprise too because Tycho is one of the most highly anticipated artists in the scene right now, know for his dreamy, ambient and psychedelic instrumentals and presented in a visual spectacular through his live shows.

The Trinity Centre, a venue known for shaping the music and arts culture in Bristol and an artist known for his unique productions and colourful artworks truly became one. Stage set in the main room, rays of blue and purple lights shining down, people gathering and a four man sound team on the ready with the visuals, a Ghostly International presentation awaits.

Out comes fellow artist Christopher Willits, presenting his new recording Opening and the world beginning to unfold as the audience glazed upon the visuals of forest trees, blue sky and flowing rivers. Music that was so chilled yet haunting, slow wave synths, pulsating beats and glittering guitar strings – seven expansive tracks and visuals of his travels throughout Japan, Thailand, Hawaii and California. Christopher inviting us to his world as he states ‘music brings us together’, engaging the audience with his artistry shoe gaze pop, I was immediately hooked and not a word spoken from the audience during his 45mins set. Each track having a direct relationship with the visuals of the natural world, tranquil and subtle layered with distant guitar tones and Chris’s harmonic thrumming – creating a cinematic experience covered up in mystery and suspense, a subtle atmosphere set in stone for the imminent Tycho.

Myself and the audience waiting in anticipation, out comes Hansen alongside band mates Zac Brown, Rory O‘ Conner and Joe Davancens; everyone taking their places and the stage lights shine down, a brief moment of silence then a surge of ambient energy presents itself. Enter the world of Awake, Tycho’s latest record which brings his visions to life like never before. Hansen stated upon the release of Awake ‘This is, in many ways, the first true Tycho record.’ – and indeed it was, having evolved from this previous project Dive, this was a truly complete experience. From the artistic visuals reflecting on the warmth soundscapes of summer to the flawless genre blending – rock, indie, electronica, synth pop and psychedelia. Rumbling basslines weaving through electric guitar strings, solid drum presence, airy synths and bubbly electronic chords, each song had a different depth, a timeless log of art in its purest form. Tracks like See and Spectre passed with flying colours, truly bringing a euphoric energy to the room. Tycho’s music absorbs you, everything else fades away and you’re left completely refreshed, cleansed by his dreamy atmospheric soundscapes and shimmering creativity. A rupturing applause and encore from the audience, out came the band for one more and closing it down with titled track Awake.

A Ghostly International original, a pleasure to witness!